The History of Hot Springs

From early exploration of its healing waters and the city’s infamous mobster past to its Major League appeal and Tri-Lakes reputation – there’s a lot to learn about Arkansas’ favorite tourist destination. 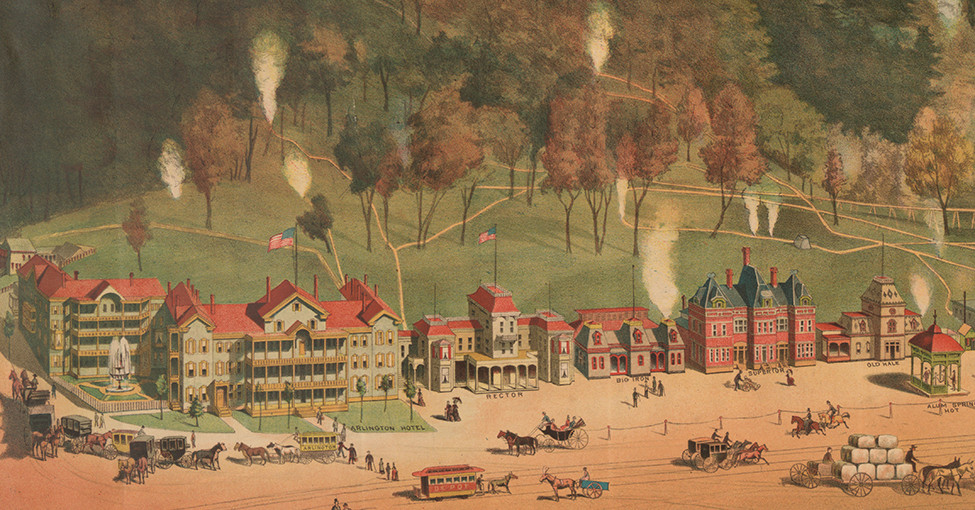 Visitors can’t help but feel the thousands of years of history surrounding them in Hot Springs — history that continues to bubble up every minute. The hot spring water comes from rainwater that fell  more than 4,000 years ago. It percolated 6,000-8,000 feet into the earth where it became superheated by surrounding rock before rising and emerging at 147ºF from the area’s 47 hot springs.

While no one knows when the first humans came to what is now Hot Springs, experts believe Native Americans — including the Tunica, Caddo, Quapaw, Choctaw, Cherokee and other groups — were using the springs as a peaceful gathering spot as many as 10,000 years ago. The Native Americans called the area “the valley of the vapors,” where tribes could put aside their differences and enjoy the rejuvenation of the springs. Oddly enough, this area became “neutral ground” again in the 1930s when mobsters from Chicago, New York and Los Angeles came to fraternize together and get away from it all.

Spanish explorer Hernando de Soto is believed to be one of the first European visitors to what is now Hot Springs while on his quest for an earthly paradise — a fabled city of gold.

Guided by Native Americans, he and his troops arrived in September 1541 to partake in the thermal springs. As far as it's known, de Soto was the last European visitor for more than 100 years, until French explorers Marquette and Joliet arrived in 1673 to claim the area for France.

Possession seesawed between France and Spain until 1803, when the United States acquired it as part of the Louisiana Purchase.

In 1804, President Thomas Jefferson commissioned an expedition to explore the area. The explorers found a log cabin and a few rudimentary shelters used by people visiting the springs, but no permanent dwellers. In 1807, a man named Prudhomme became the first settler of modern Hot Springs, and John Perciful and Isaac Cates soon joined him.

In 1820, the Arkansas Territorial Legislature requested the springs and the adjoining mountains be deemed a federal reservation. Congress established the Hot Springs Reservation on April 20, 1832 to protect the hot springs area. This makes Hot Springs the oldest park in the National Park System — 40 years older than Yellowstone.

In 1921, Congress changed the name of Hot Springs Reservation to Hot Springs National Park, which now encompasses 5,500 acres. The park includes famous Bathhouse Row, which consists of eight unique, turn-of-the-century bathhouses in the heart of downtown.

Library of Congress Prints & Photographs Division
Share It Tweet It Pin It
LEFT: The Imperial Bath House around 1900 | RIGHT: The Grand Promenade and The Arlington Hotel around 1900 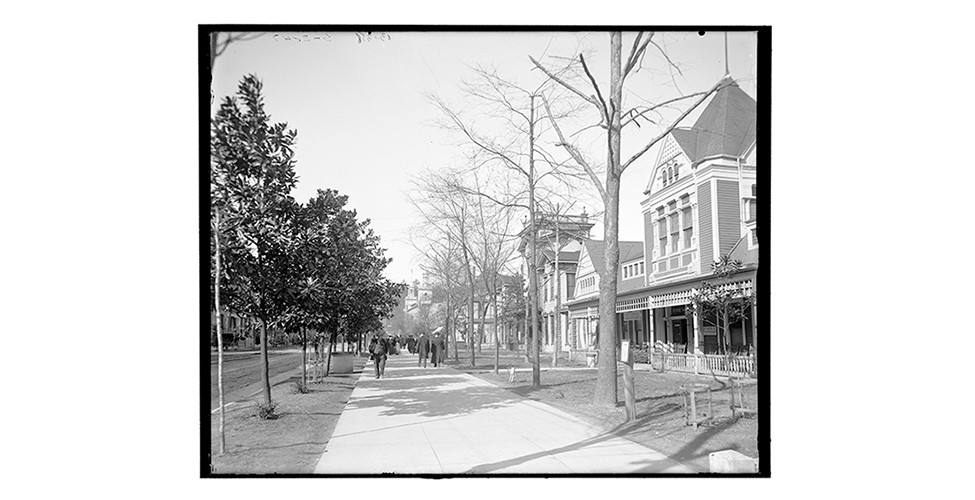 Library of Congress Prints & Photographs Division
Share It Tweet It Pin It
Pedestrians meander along Hot Springs’ Bathhouse Row sometime between 1900 and 1910.

A RESORT IS BORN

History Beneath Your Feet
For years, the springs flowed into Hot Springs Creek, which ran through the middle of the resort town. In the late 1800s, the creek was put into a channel and roofed over. Today, the creek continues to flow under Central Avenue.

Over the years, Hot Springs became famous for its therapeutic benefits. The area attracted more visitors and developed into a well-known resort nicknamed “The American Spa” because it attracted not only the wealthy but also health seekers from around the world. It was believed for hundreds of years that the natural thermal waters could cure any number of ailments, including arthritis and polio. The baths faded as a medical treatment with the advent of modern medical science, but people still came by the thousands for relaxation.

Famous visitors who have frequented Hot Springs range from boxing champion Jack Dempsey to performers Sarah Bernhardt, Liberace, the Smothers Brothers, Bill “Bojangles” Robinson and Presidents Theodore Roosevelt, Franklin D. Roosevelt and Harry Truman. It's reputed that Tony Bennett first performed his signature song “I Left My Heart in San Francisco” during a rehearsal at the Black Orchid Club in 1963, and in the 1940s, actor George Raft could often be seen driving his convertible along Central Avenue.

Share It Tweet It Pin It
Today, Central Avenue is the city's main drag, weaving through historic downtown all the way to the Lake District.

During the late 19th and early 20th centuries, Hot Springs was the off-season capital for Major League Baseball. The Chicago Cubs, Pittsburgh Pirates, Brooklyn Nationals, Chicago White Stockings and the Boston Red Sox all held spring training in Hot Springs. Babe Ruth first visited the spa city as a young pitcher with the Red Sox, but returned often for baths and rounds of golf.

In celebration of these deep connections to America’s pastime, the city recently inaugurated The Historic Baseball Trail. A series of plaques and a smartphone-guided tour map out major moments in Hot Springs’ baseball history — like Babe Ruth’s first 500-foot-plus home run achieved while playing ball at Whittington Park. 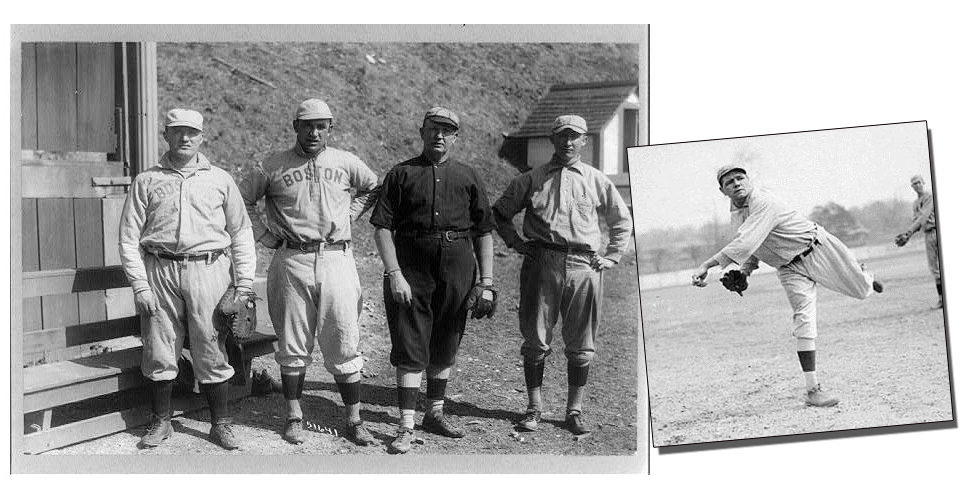 From the 1920s through the 1940s, Hot Springs flourished as a place where the famous and infamous came to enjoy the thermal waters, luxury hotels and illegal gambling and bootlegging, especially in the 1930s. Gambling hotspots included The Ohio Club, Hot Springs' oldest bar, and The Southern Club (now the location of the Josephine Tussaud Wax Museum), which was reputed to be owned by mobster Owney Madden. He was one of the founders of the New York mob, was part of Murder, Inc., and owned Harlem’s famous Cotton Club.

Infamous mobsters such as Al Capone were frequent visitors, with Capone taking up part-time residence in Suite 443 of the Arlington Hotel. Mobster Charles “Lucky” Luciano was arrested in Hot Springs on the promenade behind the Ozark Bath House. He was in town gambling and taking the baths.

Illegal gambling was permanently shut down in Hot Springs in 1964, thanks to a federal crackdown on what the government called “the site of the largest illegal gambling operation in the U.S.”

Remnants of the city’s notorious past can still be found inside Hot Springs’ Gangster Museum of America, which showcases old roulette tables, vintage slot machines, Madden and Capone exhibits and gangster weapons. 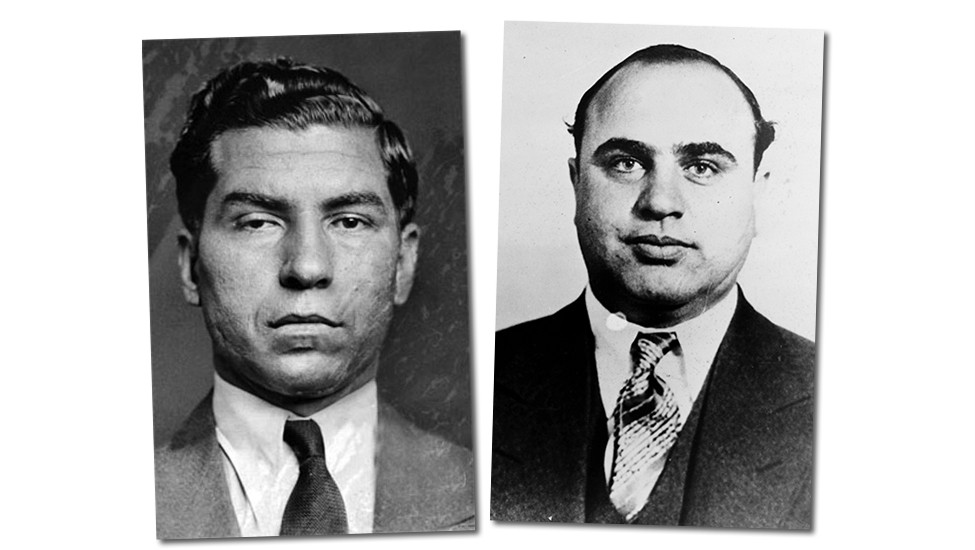 Share It Tweet It Pin It
The father of modern organized crime, Charles “Lucky” Luciano (left) was on the run when he was arrested behind Ozark Bathhouse. Al Capone (right) regularly visited Hot Springs, even taking up part-time residence in Suite 443 of the Arlington Hotel. 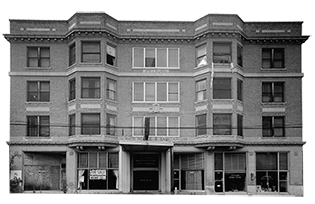 Prior to the Civil Rights Movement, Hot Springs’ bathhouses were racially segregated, with the best bathhouses catering only to whites. Despite the injustices segregation caused, the city saw a flourishing of African-American bathhouses after the turn of the century.

The Crystal Bathhouse, built in 1908, was the first black bathhouse in the city and operated until a fire destroyed it in 1913. The Pythian Bathhouse & Sanitarium opened on the site of the old Crystal Bathhouse the next year and served patrons — including many black celebrities — until 1974.

Perhaps the grandest, the Woodmen of the Union, opened in 1922 with first-class hotel accommodations, a 2,000-seat theater and a steady stream of entertainers and celebrities during its heyday.

One of the most notable Hot Springs features is Bathhouse Row, which consists of a series of eight historic architecturally unique bathhouses lining Central Avenue.

The Fordyce Bathhouse, built in 1915, is one of the most recognizable of the eight and serves as the Hot Springs National Park Visitor Center. It's the largest and most ornate of all the bathhouses in town.

In 1922, the Quapaw Bathhouse was built in the Spanish Colonial Revival style and boasts a large Moorish-style dome capped with a copper cupola. Possibly the most interesting aspect is the basement grotto containing the Quapaw Spring, which serves as a natural steam room for the bathhouse today.

Buckstaff Bathhouse, built in 1912, is the oldest bathhouse still in operation. It was built in the Neoclassical Revival style, with engaged Tuscan columns that divide the main façade into seven bays flanked by pavilions at the north and south ends. 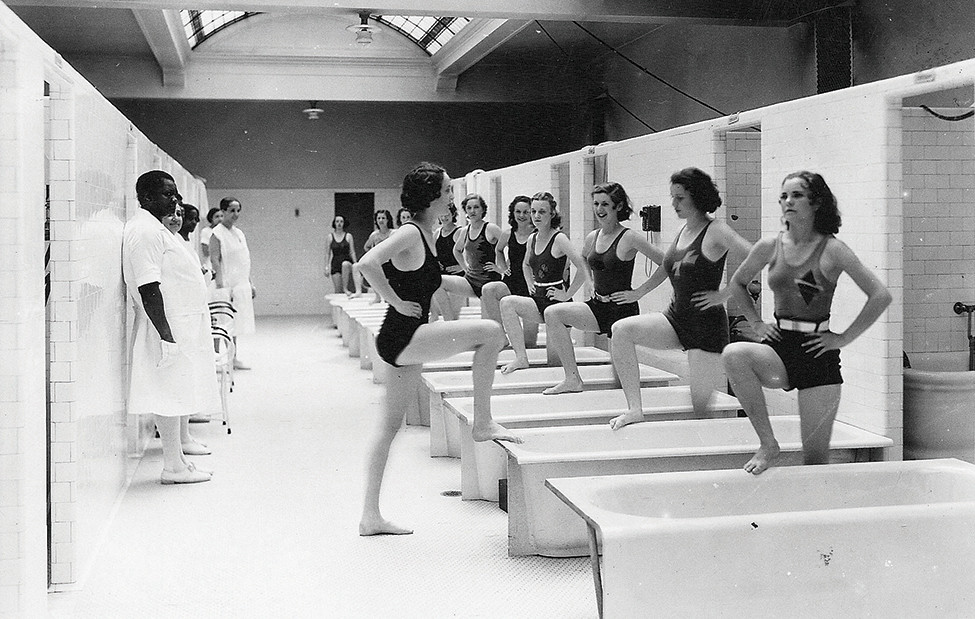 Share It Tweet It Pin It
Health concerns brought visitors to Hot Springs in droves for therapy, as well as exercise.

In 1871, pharmacist Peter Greene and his brother John bought Lockett Springs in Hot Springs and began selling mineral water they called Mountain Valley Spring Water. By 1928, the water’s popularity and association with the health spa boom allowed the company to expand distribution — making Mountain Valley the first bottled water available coast to coast. Famous fans of the water include Frank Sinatra and Elvis Presley, and it was even the choice of the U.S. Senate in the 1920s. Today, visitors can explore the company’s rich history at Mountain Valley's Museum of Bottled Water. The museum showcases nearly 150 years of bottles, barrels, photographs, specialized machinery and more.

Hot Springs continues to make history with its fine restaurants, entertainment venues, art galleries and incredible natural beauty. On a cool night, while strolling down Central Avenue, a visitor can actually see the steam vapors drifting down from the hillside springs as they have for thousands of years. It’s a momentary glimpse into history that is offered only in Hot Springs.

Today, Hot Springs’ lakes have become the major draw to the area, and they’re the perfect complement to a resort known for its water. Hot Springs began to expand this resort reputation in the 1930s with the construction of Lake Catherine and Lake Hamilton to the south of downtown Hot Springs, and in the 1950s, Lake Ouachita was created, earning the area its “Tri-Lakes” nickname.

Oaklawn Racing & Gaming
After its founding in 1904, Oaklawn Park became one of America’s most famous tracks for Thoroughbred horse racing. Over the years, it’s drawn thousands of visitors and witnessed the crowning of many champions, including American Pharoh in 2015, who went on to win the American Triple Crown.

Learn more about Oaklawn at A Full House of Excitement at at Oaklawn Racing & Gaming.

Hot Springs by the Numbers